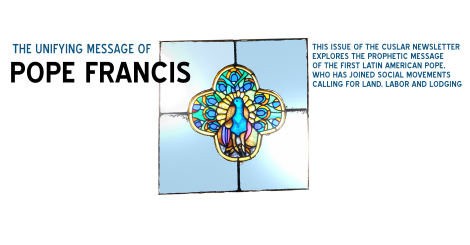 Introduction to the issue
by Jordan Cowell and Tim Shenk
Committee on U.S.-Latin American Relations (CUSLAR)

On April 15, three CUSLAR student interns presented initial reflections from a semester-long study on Pope Francis at the Kairos Center for Religion, Rights and Social Justice at Union Theological Seminary in New York City. This edition of the CUSLAR Newsletter is a compilation of some of the findings emerging from this ongoing collaboration with the Kairos Center.

Pope Francis’s message resonates deeply with the missions of CUSLAR and the Kairos Center. Our research was born from questions about how his prophetic and pastoral language could unite people across partisan lines.

Francis has called for the Catholic Church to be “a church of the poor and for the poor.” He has echoed social movements’ calls for land, labor and lodging. He has spoken clearly against structural inequality, called poverty and hunger “social sins” and denounced those contributing to climate change.

He encourages Christian clergy and lay leaders to dirty their feet in the shantytowns of the world and struggle shoulder to shoulder with the poorest of God’s children: “Shepherds,” he says, “must smell of sheep.”

In looking at Francis’s focus on global solidarity, human rights for marginalized populations, and the role religion can play in social movements, we’ve asked ourselves if Pope Francis is an outlying radical, or if his critiques represent a larger shift in society now underway.

Radical or not, in our current historical moment, Pope Francis’s message is both fitting and urgently necessary. Kairos is a Greek term signifying the “opportune moment” or the hour for action. Pope Francis sees this opportunity — this need — for a big changes in the Catholic Church and in society, and he acts upon it. He seizes the kairos.

Shailly Gupta Barnes of the Kairos Center visited CUSLAR last September, and she spoke about kairos moments and the struggle against poverty.

She said, “we see the moment that we are in in the United States but also in the world as one of these kairos moments. And there have been kairos moments in all of human history, and because they are moments, they come and they pass. We feel that if there is an opportunity that if we understand this moment, the potential for a real transformational movement exists. Because of the unique place that the United States plays within the world, economically, militarily, and culturally, we see a particular need to catalyze this movement here in the United States.”

May Pope Francis’s words inspire and embolden us in our efforts for global justice and mutual understanding.

May this edition of the CUSLAR Newsletter contribute to a better understanding of this kairos moment and the opportunities at hand to make possible a decent life for all. 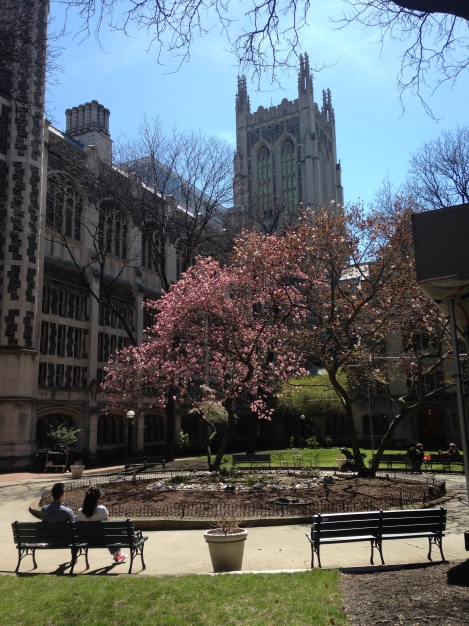 This spring the Kairos Center for Religions, Rights and Social Justice at Union Theological Seminary hosted Gabriela LeBaron, Jordan Cowell and Julia Smith, students who are part of CUSLAR at Cornell University. They joined our class on Peacemaking and Social Movements, a semester-long course that looks at the role that social movements and grassroots formations of the poor and dispossessed have played in changing social consciousness and conditions.

In this class, we talked about Sufism in Niger, West Africa, and how Sufi leaders are addressing deep poverty through building community.

Then the CUSLAR students shared their research on Pope Francis: his history and biography, his relationship with social movements, and his vision for a better world for the poor and us all. Moving from a discussion of Islam to Catholicism isn’t often easy, but we all were honestly seeking guidance on how to resolve some of the most pressing social ills. And despite our individual experiences with religion and faith, there was something in the words of these leaders that we all could learn from.

It was an enriching exchange that the Kairos Center hopes to continue with CUSLAR in months and years to come.