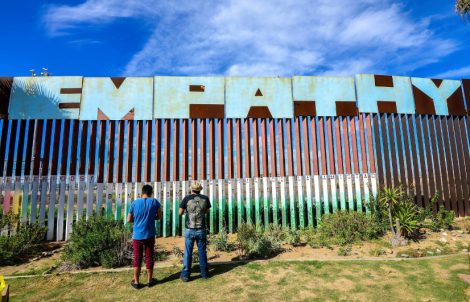 The U.S-Mexican border may have receded from our news feeds, but the asylum crisis there still rages on.

On March 22 Cornell students Karla Castillo and Victoria Inojosa as well as Mexican Anthropology student Margarita Nuñez, put human faces on the humanitarian crisis endured by thousands of Central Americans seeking asylum in the United States. They highlighted abuses perpetrated by the U.S and Mexican governments in the CUSLAR-sponsored event, titled “On the Ground with the Migrant Caravans.” All three speakers have had recent direct experience working on the border or accompanying a migrant caravan.

Castillo, a Fulbright scholar from El Salvador studying at the Cornell Institute for Public Affairs (CIPA) interned during her winter break at an NGO called Border Angels. The organization does migrant outreach in Tijuana, immigration consulting, and education and advocacy.

Castillo shared about the life-or-death experiences she was privy to while with Border Angels for those short weeks. She said, “It was January 14 and I was about to go to sleep until I received a call. ‘Please come for me because they want to kill me’. It was a Salvadorian migrant that I met in Tijuana… at that moment he was being kidnapped by four armed men who he identified as members of the Cartel.” Another migrant, who was facing an indefinite wait for his asylum claim to be heard, told her, “I did not leave my country to die here.”

Castillo shared photos of masses of people gathering in San Salvador to travel north together and explained the lack of central organization of the caravans. Caravans have formed predominantly as a result of social media messages on Facebook and WhatsApp, communicating open invitations.

She also discussed the reactions to the migrants traveling in groups. Initially, the Mexican government’s unwillingness to assist migrants made left them vulnerable to the elements and organized crime, and more pressing problems began when the migrants began facing racial and cartel tensions in Northwest México. Especially difficult is Tijuana, where most migrants wait to have their asylum claims heard: Tijuana was ranked in 2018 as the most violent city in the world.

Castillo concluded by acknowledging that the impossibly long waits for asylum hearings may encourage migrants attempt to enter the U.S through the dessert without authorization.

Inojosa is a third-year law student who volunteered in January with the Dilley Pro Bono project under the direction of Cornell Law Professor Jacklyn Kelly-Widmer and provided legal aid to the women and children fleeing gangs and gang violence She was tasked with preparing women for what the United States Citizenship and Immigration Services calls a “Credible fear Interview,” where asylum seekers must prove to immigration officers that they are “under a continued threat of persecution based on race, religion, nationality, political opinion or membership in a particular social group.”

This very specific criteria required to even begin the asylum process in the U.S is problematic as it slashes the number of possible applicants drastically: those escaping their country due to gang violence don’t qualify

Nuñez, a doctoral student at Mexico City’s Centro de Investigaciones y Estudios Superiores en Antropología Social, joined the event via Skype. She is a founder of the Laboratorio de Investigación Social Justicia en Movimiento, an organization dedicated to research with a human rights focus and gender perspective. She has accompanied several migrant caravans traveling through Mexico as part of her field work since 2015.

Nuñez shared information recently made public that the U.S and the Mexican governments conspired by targeting those who would help migrants: “It is known that the U.S and Mexican governments have a joint intelligence operation called “Operation Secure Line” that targets advocates, journalists, migrants, and even preachers, whom have faced government surveillance, harassment, and even the denial to entry Mexico.”

She dispelled the myth that migrants were not aware of the dangers that they would face on their Journey. One man she spoke echoed the general sentiment, saying: “If some of us die at the border, at least we would die trying it, and at least we would die here, because for us there just wasn’t any chance to keep on living in our countries. We were already dead in there.”

This legal apparatus that disregards the safety of migrants and deports them back to their country of origin or leaves them stranded in a dangerous city is indicative of a larger issue in the United States. Immigration policies should be efficient and reasonable, and they should judiciously provide aid to those who are fleeing their country regardless of the kind of persecution they are escaping. Persecution is persecution, and weeding people out because they haven’t suffered just the right category of violence means that many people, including children, will be sent back to their country to face death.

Kevin Maldonado is a junior studying Government in the College of Arts and Sciences at Cornell University.

One response to “Asylum crisis on the southern border”