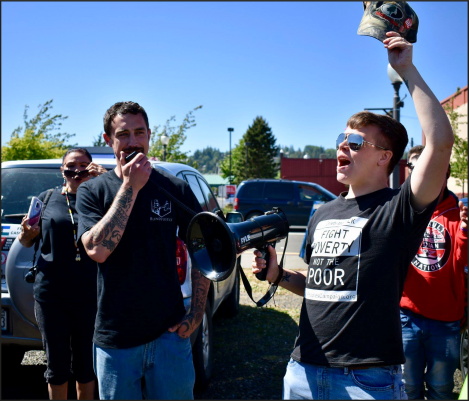 Aaron Scott, right, organizer at Chaplains
on the Harbor and member
of the National Steering Committee of the Poor People’s Campaign, participated in the Poor People’s Campaign tour
and vigil for housing in Aberdeen, Washington, home of Chaplains on the Harbor on June 11.
In the spring, Scott spoke at a Shabbat service at Kadima Reconstructionist Community in Seattle,
at the invitation of Rabbi David Basior, also part of the Campaign. This article is the text of that message.

I’m a second-generation preacher and a third-generation organizer. I grew up in rural New York State. My mother and grandmother were union reps, my grandmother was interrogated by the feds on suspicion of communist activity during the McCarthy era. This was before she really started organizing. My dad pastored poor Methodist churches in the foothills of the Adirondack Mountains and in small rust belt towns.

The first time I remember hearing one of my classmates call for Jews to be put to death, I was twelve and sitting in the back row of English class. I was seventeen when one of my friends handed me a copy of “The Protocols of the Elders of Zion,”
after we’d had conversations trying to understand the poverty of our region.
I was propagandized with hardcore antisemitism years before I had any real relationships with Jewish people. So when I think about the poisoned groundwater
I grew up in, and the way I try to orient myself in fighting antisemitism, I don’t come with many illusions about where this nation is at. I come from a place of repentance and in a spirit of atonement.

I work as an organizer now in rural Grays Harbor County, Washington, specifically in Westport and Aberdeen, with people experiencing poverty, homelessness and incarceration. Most of our time at Chaplains on the Harbor is spent on projects of survival and on community building. Our ultimate goal is the full abolition of poverty, so we also do popular education on the root causes of our community’s suffering, and we put our community — which is primarily poor whites (Christian and non-religious) — in direct conversation and relationships with other struggling communities across racial, ethnic, geographic and religious differences.

Along these lines, we also do counter-recruitment from white supremacist street and prison gangs, including the Skinheads. In our context, most of the young people targeted for recruitment into these groups are preyed on because of their poverty. They generally don’t join for ideological reasons, but survival reasons: protection behind bars, employment in the black market upon their release, and a sense of belonging in a county that’s three generations deep in CPS child removal. What this means for our counter-recruitment work is that material support and deep relationships are our most effective tools. We don’t initiate counter-recruitment by handing out pamphlets — we initiate it by feeding people, distributing Narcan, offering sanctuary inside our church to people with outstanding warrants, and visiting our incarcerated members.

That’s because as real and longstanding as the violence is on the ground, if you know how to crack through, people’s capacity for solidarity is greater by far.

One thing that has become clear to us in doing this counter-recruitment work is the reason why poor communities — maybe particularly poor white communities — are so heavily propagandized with antisemitism. In many ways it’s the same reason we’ve been so heavily propagandized with racism and xenophobia: our communities are ripe for class revolt. Once the rednecks who make up our base come into contact with Black Panthers and veterans of the Civil Rights Movement, and realize their common experiences of trauma, grief, and disenfranchisement, they become deeply animated and deeply agitated. The state and the ruling class will aim to undermine and repress this at any cost. That’s because as real and longstanding as the violence is on the ground, if you know how to crack through, people’s capacity for solidarity is greater by far.

In our work supporting homeless encampment residents fighting the city of Aberdeen’s sweeps, we have literally watched street kids with swastika tattoos fall in line under the leadership of young Black homeless women, on the basis shared struggle and interests.

We are bringing together groups like mine with
faith communities like yours because unity and organization are the only way we are going to crawl out of the hell we’re in.

Last spring, a group of our millennial members on lock-down at the Grays Harbor County Jail decided on their own to fast and study the scriptures during Holy Week. They did this across racialized gang lines, and reported their group’s diversity to our priest over the phone with a lot of pride — as a group they were not only multiracial, but also interfaith: atheists, Christians, one Buddhist, “and one kid is even Jewish!” The passage they latched onto was Isaiah 58:12 because, they figured, as young people raised by the Harbor’s streets, they were the most qualified to be “restorers of the streets to live in.”

My coworker at Chaplains on the Harbor, Mashyla Buckmaster, a former street kid and now a single mom in Section 8, spoke at the national launch of the Poor People’s Campaign in December. She said,

I’m joining the Poor People’s Campaign because I need a movement that’s as tough as I am … Some of you might be suspicious about a Grays Harbor County person getting up in front of this crowd, thinking ‘Aren’t they just a bunch of rednecks out there?’ Hell yes, we’re rednecks. We’re radical rednecks. We’re hillbillies for the liberation of all people. ‘We are the living reminder that when they threw out their white trash, they didn’t burn it.’ We’re here to stand shoulder to shoulder with anybody taking up this campaign, and trust me, we are the kind of scrappy you want on your side in a fight.

The Poor People’s Campaign: A National Call for Moral Revival is a moral movement from the bottom, for the transformation of this whole society. We are bringing together groups like mine with faith communities like yours because unity and organization are the only way we are ever going to crawl out of the hell we’re in here and now.

Basically, we are trying to take Jethro’s advice to Moses seriously: “The work is too heavy for you; you cannot handle it alone” (Exodus 18:18). Stop trying to be the Lord’s sole ambassador, and build a disciplined mass movement instead. We are not taking policy positions but moral positions. We are calling for 40 days of nonviolent direct action this spring in moral protest of systemic racism, poverty, the war economy, and ecological devastation.

We are holding the line as a moral mass movement because that is how we will win. The abolition of slavery in this country was not won by platforms and policy wonks. It was won by the likes of Harriet Tubman, Frederick Douglass, John Brown, and countless faith communities who poured their resources into and risked their necks via direct action for the Underground Railroad and the cause of emancipation.

I want to invite all of you to formally join the Campaign, which you can do by filling out the pledge.

As a matter of long-haul movement building, though, I want to make another invitation. You know that Grays Harbor County is both Trump and Skinhead territory. If you all at Kadima ever do us the honor of coming out to visit, we will do our part to protect you. Chaplains on the Harbor has a base of about 500 local people: hillbillies, street punks, Native elders, single moms, trailer park revolutionaries, sex workers, and most of the population at the county jail.

We don’t control the local political scene (yet), but we know somebody who knows somebody at every back alley and underpass, and while we are cash poor we are rich in street credibility and skilled at street protection. We want you to know that we, as radical rednecks, are here for Jewish people. We are ready to ride for Jewish people. We hope you’re willing to ride with us.

Aaron Scott is an organizer at Chaplains on the Harbor in rural Grays Harbor County, Washington State. He is also the Missioner for Anti-Poverty Organizing in the Episcopal Diocese of Olympia, a member of the Washington State PPC Coordinating Committee, and serves of the National Steering Committee for the Poor People’s Campaign. Aaron is happily married to The Rev. Shelly Fayette and proud papa
to baby Moses. This article was first published at kairoscenter.org.