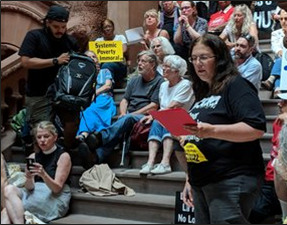 Suzanne Flierl Krull, director of the Cuba Cultural Center in Cuba, NY, spoke on the State Legislature’s “Million Dollar Staircase” in Albany, NY on June 18. The rally was part of the Poor People’s Campaign’s initial 40 Days of Action where tens of thousands from 40 states demanded justice in statehouses.

I live in the western part of New York’s Southern Tier, and was raised in affluence and privilege.

Throughout my adult life, however, my household has been low-income or poor most of the time. I have had to make the same difficult decisions that other poor people like me face throughout the U.S. every day. The struggle to survive against a system that keeps us poor is real, and it’s hard, and it’s riddled with injustice.

But the struggle is made even harder by the narrative of condemnation the poor face. This immoral narrative says we are greedy, lazy sponges that don’t give anything back.  But that’s not true! Eight out of ten adult SNAP recipients who are neither disabled nor elderly have worked within in the last year, and more than half of us have worked in the last month. Many of the poor work multiple jobs at immorally low wages and still can’t pay their bills. That’s not lazy, that’s not greedy, and that’s not right!

Eleven million of us pay more than
a third of our income on housing: housing that is frequently unstable, hard to find, and often unsafe. There is not a single county
in America where a mínimum-wage
worker can afford a two-bedroom apartment.  That’s not right!

The immoral narrative also says that the poor just take and take, while the wealthy earn everything they get.  That’s not true! Our government spends billions of dollars giving subsidies and tax breaks to the upper middle class and to the wealthy, and they treat corporations like rich individuals. All the while, low-income workers have to beg, march, and protest to demand $15 and a union. That’s not right!

The immoral narrative tells us that single urban moms and uninvolved dead-beat dads, especially Black dads, are the cause of poverty in America.  That’s not true! In 2014, only 9 percent of low-income, urban moms were single during their children’s first five years, and Black fathers are actually more likely to spend time with their children each day than white fathers.

The immoral narrative says if we would just get an education, then we’d be all right. That’s not true! Outrageous college costs keep graduates buried in debt. Fewer than half of the college graduates who have student loan debt can afford to own houses. Many graduates can’t keep up with their loans. As of September 2017, millions of graduates had not made a payment on $144 billion of federal student loan debt for at least 9 months because they lacked income.

In the Southern Tier, I run a nonprofit that works in the struggle to provide survival programming to poor and otherwise oppressed people.  We are a group of folks who know struggle, and who are still struggling against a system that keeps us marginalized. But as we struggle, we’re also providing basic needs to our communities. We’re making a difference. But survival programming isn’t enough.  We need justice. All of us who know oppression need to unite, and we’re doing that in the Poor People’s Campaign: A National Call for Moral Revival. We’re crossing over the things that have divided us and that have kept us separate, and we’re working together. We’re building a new, unsettling force to end oppression. We are here, we’re not going anywhere, and we will be back!