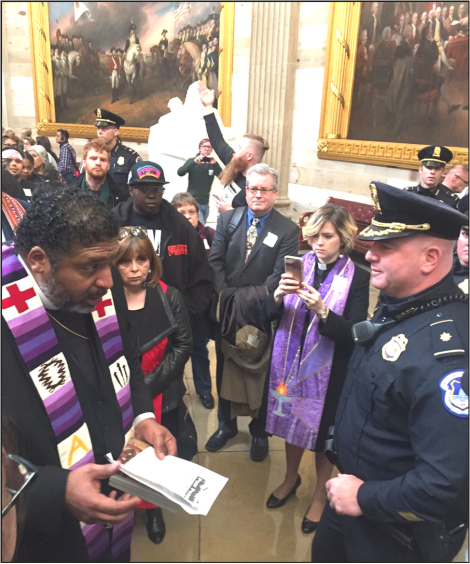 by Tim Shenk
Coordinator, Committee on U.S.-Latin American Relations (CUSLAR
This article serves as an introduction to the Winter/Spring 2018 edition of the CUSLAR Newsletter, available in print and online here.

The Poor People’s Campaign: A National Call for Moral Revival launched in Washington, DC on December 4, on the 50th anniversary of the day that Rev. Dr. Martin Luther King, Jr. and others came together “to demand that the government address itself to the problem of poverty.”

The new Poor People’s Campaign is no simple commemoration of the work for which Dr. King was assassinated. Diverse national leadership led by clergy and the organized poor themselves is planning massive nonviolent civil disobedience in 25-30 state capitals and Washington, DC for May and June.

The goals? To call attention to the deepening crisis that is ongoing for the nearly one in two Americans who are poor or low-income, and to connect the roots of poverty to the roots of racism, militarism and ecological devastation.

At CUSLAR it is our mission to promote justice and mutual understanding in U.S.-Latin American relations. Generations of CUSLAR members have seen and felt in Latin America the repressive acts of the U.S. government, what Dr. King called “the greatest purveyor of violence in the world.” This has driven us to call our government to account when it has failed to promote or even allow other nations their right to make decisions that affect their lives.

In addition to advocacy abroad, Dr. King challenged us to get our own collective house in order. His last effort was to build a Poor People’s Campaign. “There are millions of poor people in this country who have very little, or even nothing, to lose,” he told his staff in 1967. “If they can be helped to take action together,” Dr. King said, “they will do so with a freedom and a power that will be a new and unsettling force in our complacent national life.”

Abandonment in the midst of abundance

The new and unsettling force King called for has been put in motion 50 years later. Poor people from around the U.S. are testifying to conditions of abandonment in the midst of abundance in the world’s richest country.

Mashayla Buckmaster from Grays Harbor County, Washington traveled nearly 3,000 miles to the nation’s capital on December 4 to challenge the false belief that it is people’s own fault if they find themselves poor or homeless.

“I wasn’t homeless because I’m stupid or lazy,” she said. “I was homeless because our county has no problem with pregnant mothers being homeless in the winter, while just two hours away in Seattle, the CEOs of Microsoft and Amazon have made themselves the richest individuals on the planet.”

Residents of Flint, Michigan, still have toxic lead levels in their water more than two years after this public health disaster was brought to national attention. Claire McClinton of the Flint Democracy Defense League expressed her outrage about the fact that 4 million U.S. families don’t have access to clean water.

At a Poor People’s Campaign mass meeting in Binghamton, NY in October, Tioga County, NY resident Jackie Bogart reported having to feed her family from dumpsters for weeks while she had no income, and being told by a county agency that she had to drop out of college to take a minimum-wage job.

At the same event, Bobby Black spoke about race and class discrimination in the prison system. Many poor people, predominantly black and brown, accept a plea bargain even if they did nothing wrong, if they can’t come up with the cash to get out on bail. For many, he said, staying in jail even a few days means risking losing their job, their home and even their children.

Hunger, poor access to water, state repression and other symptoms of an unequal and unjust system are the sorts of things CUSLAR members have denounced in Latin America for decades, especially in cases where the U.S. military and global corporate interests have been involved. Today those problems are becoming more rampant in the U.S. as our hard-won social safety net unravels.

We think this campaign is our best shot at taking on poverty, systemic racism, militarism and ecological devastation — together, not as separate or competing lobbying issues.
If we’re serious about our mission of justice in the hemisphere, it makes sense to
set our sights at least in part here at home, on the nerve center and the enforcement arm of global capital.

In this edition of the CUSLAR Newsletter, you’ll find excerpts from local Poor People’s Campaign events as well as students who have shown courage and vulnerability to share their own struggles with poverty and the immigration system.

We also highlight the ongoing crisis in Puerto Rico, indigenous struggles and the 2018 elections in Mexico, student reflections from the Cornell-CUSLAR Global Health Program in the Dominican Republic and a book review on the U.S.-backed coup in Guatemala.

With our stories, our songs and our feet, we can win the battle for the soul of this nation.