S.744 is a Senate bill introduced by the bipartisan “gang of eight” and passed in June 2013. Similar legislation is under consideration in the House of Representatives, which needs to pass there in order to become law.

What s.744 says
The changes in the legislation include a “trigger” system, an amnesty program for many undocumented immigrants currently in the US, a shift from family to employment based visas, as well as judicial changes.

The trigger system refers to the agreement that as part of the bipartisan compromise, before any amnesty program would be established, certain border security measures must be implemented. These include updates on the border fence and doubling the size of the border patrol to more than 38,000 agents.

Additionally, the trigger system would make the national e-verify system mandatory for all businesses within five years. E-verify allows employers to check the immigration status of all potential employees. Most famously, the Registered Provision Immigrant (RPI) status allows amnesty procedure for certain individuals, provided they’ve been in the US for a certain period of time, have not committed any crimes and can pay back taxes and a penalty fee.

In a period of about 9 years, the RPI status could lead to citizenship status, although this process could be accelerated for those also covered under the DREAM Act or Agjobs, a provision to provide short term visas for much needed farm workers.

Judicially, the legislation allows for legal representation for asylum seekers, more discretion for judges in deportation cases, and stricter penalties for immigrants with a previous record.

S.744 envisions big increases in border security. These include more expenditure, from $3.5 to $46.3billion, 38,405 new border patrol agents, 700 miles of fence, improvement in technology and increase in prosecutions and judicial resources, including a mandated 90 percent closure rate for overstayed visa cases. These changes must be put into effect before any changes to legal status would take place.

Most famously, s.744 creates new rules concerning undocumented immigrants in the United States and future legal immigration. Current undocumented immigrants can apply for Registered Provision Immigrant status if they have been in US since December 31, 2001, have no felonies, fewer than three misdemeanors, have pay assessed taxes, pass background check, pay application fees and $1,000 penalty, and not in ineligible/excluded category under current law. Children and spouses are also eligible, although no people covered under RPI status would be covered under federal services like Medicaid and Social Security. The RPI status is good for six years and eligible for a six-year renewal pending continuous employment or being a certain amount above the poverty line. Additionally, they could be eligible for a green card after 10 years, or after five if also DREAMer or Agjobs employee.

In addition to increasing border security, the bill also further intensifies interior security measures, while simultaneously providing more protection for vulnerable populations. Mandated use of E-verify after five years, would be used to check immigration status of new employees, although it could not be used for discriminatory purposes. There would also be increased protections for asylum seekers, decreased use of detainment, but increased penalties for immigrants with criminal records.

A fund for low-income youth employment would be created from a surcharge on new employment and nonimmigrant visas.

These recent legislative efforts of 2013 make enormous strides for ensuring protections and equality for undocumented immigrants. Some remaining concerns include the long timeline for receiving citizenship, increasingly stringent penalties on those who come after the relatively arbitrarily set deadline, and the exclusion of those making under 25 percent of income or who have been unemployed.

On the enforcement end, many have raised concerns about the viability of the border adjustment, with many concerned that improving the quantity of protections won’t necessarily constructively improve the quality. The National Border Patrol Council itself has questioned the effectiveness of adding more patrolmen, saying that the investment could lead to less training and supply shortages.

Lastly, many activists agree that the legislation is a step in the right direction, yet most concur that tangible change for immigrants will take place with grassroots activism, not Washington politics and laws.

Democratic House members recently submitted a discharge petition, in an effort to get a vote on some bills still stuck in committee, including the immigration reform bill. Although they do not have enough votes to actually get the discharge petition passed, the move publicized Republican inaction on the issue and was intended to sway public opinion, which could in turn change Republican strategy.

This article is part of the CUSLAR Summer/Fall 2014 Newsletter. To access this and previous newsletters, go to https://cuslar.org/resources/cuslar-newsletter-since-1974/

Common Misconceptions about Immigration to the U.S. Perception: “People should just get in line to legally enter the US” (Why do we need Reform?) Reality: 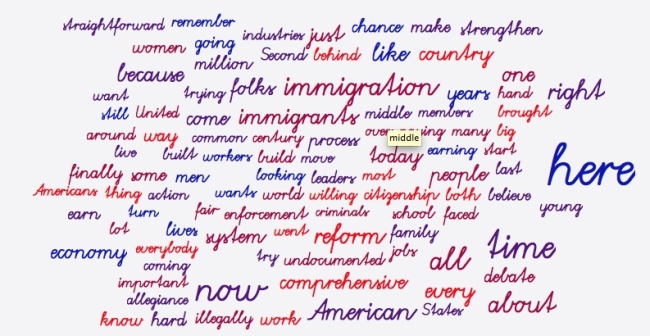