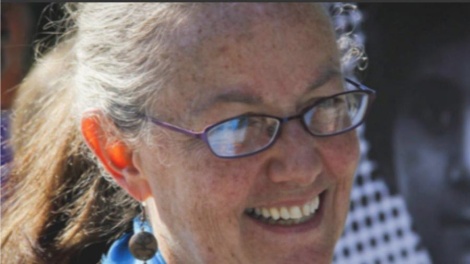 Appeal to be heard by NYS Court of Appeal – 2pm

Ithaca, N.Y. On Wednesday, Oct. 11, 2017, the long-awaited appeals case of Mary Anne Grady Flores, one of many grandma drone protesters at NYS Hancock MQ-9 Reaper Drone Base, will be heard by the N.Y.S. Court of Appeals, 20 Eagle Street, Albany, NY, 12207. Depending on the verdict, Grady Flores, who has already served 56 days, may complete another 65 days in Jamesville, Onondaga County Jail, E. Syracuse. The NYS Court of Appeals, the highest court in NY State, with a panel of seven judges, will render a decision in one to six months. Watch tomorrow-Wednesday, 20 minutes: 2:15-2:40 pm NYS Court of Appeals Live Stream. At 3:15pm a press conference with Mary Anne’s attorney Lance Salisbury, drone activists Kathy Kelly, Ed Kinane, and others will be held in the park across from the court, posted live on Grady Flores facebook page.

On Feb. 13th, 2013, Ash Wednesday, Ithaca Catholic Worker, Grady Flores took pictures of Catholic protesters from the road, unknowingly crossing what Hancock claims to be its boundary, “the double yellow line in the middle of the road.”  Where she stood in the road violated her “order of protection” (OOP) which was given to protesters by a local DeWitt Court judge on behalf of Colonel Evans to keep protesters away from the base. In an appeal the OOP of another drone protester had been ruled invalid by Onondaga County Judge Brunetti because the OOP didn’t delineate how close or far people had to be from the base. Judge David S. Gideon sentenced Grady Flores to a year in jail to stop others protesters. Many, however, returned despite having an OOP.

Grady Flores’ appeal contends that an order of protections cannot be used on behalf of property. Normally OOPs are given on behalf of a victim or a witness. The use of a form of protective order developed to address domestic violence to deter protesters and chill speech raises important First Amendment issues in which NY Civil Liberties Union has taken an interest filing a friend of the court brief by NYC attorney Jonathan Wallace.

In Grady Flores’ 2014 sentencing she said, “Who is the real victim here? The commander of a military base whose drones kill innocent people halfway around the world, or those innocent people who are the real ones in need of protection from the terror of US drone attacks?” According to the Bureau of Investigative Journalism Drone Warfare page, approximately 10,000 people have been killed by drones since 2001. October 6th and 7th were the 16th anniversary of both the beginning of the Afghan war and the first US drone strike, with drone attacks worsening during the Trump administration. More US bombs and missiles were dropped on Afghanistan in September than in any other month for nearly seven years, higher than any month since November 2010,

Drone warfare is a profitable enterprise for numerous military contractors, making fortunes off of the murder of defenseless people around the world. Hancock is the largest training and maintenance center for the US MQ-9 Reaper drone program. Extra judicial killings are executed by Air Force crews sitting in front of computer screens in the Syracuse base, killing civilians in Afghanistan and Pakistan. In a five-month period in 2015, up to 90% of drone assassination victims were civilians. The base shares facilities with civilian Syracuse International Airport. Hancock Air National Guard Base has been the site of protests of the US killer drone program since 2010, resulting in over 200 arrests and numerous trials, appeals, numerous incarcerations some ending in acquittal.

(https://www.youtube.com/watch?v=otxwbkwQX-8 Drones of Upstate NY- 6 min 8/2014- interview with MA Grady Flores, Ed Kinane, Colonel of the base, and a drone.)