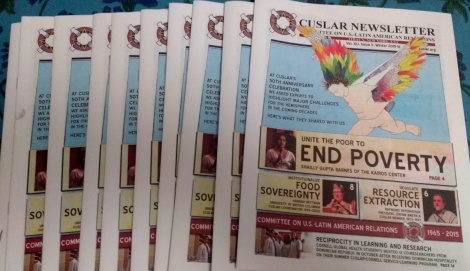 These days most news about “the migrant crisis” refers to Europe, where around 850,000 Syrian refugees made their way seeking asylum in 2015. While the Syrian case is perhaps the most visible, displacement and involuntary migration are ongoing problems of increasing global scale and scope. There are significant numbers of Asian workers in the Middle East, Nigerians in China, 5.7 million internally displaced people in Colombia, and children are still coming to the U.S. from Central America.

Movement of people is one result of crises related to poverty, food and resource extraction, topics our speakers at CUSLAR’s 50th Anniversary events cited as today’s central challenges.

Conditions trigger the movement of the tired, poor and huddled masses, and these millions require a response.

Even amid recession and jobless recovery, the United States has continued to be the top destination for migrants. The current U.S. administration has been unable or unwilling to develop a response that prioritizes the rights of migrants, despite a more humane rhetoric than many Republican presidential hopefuls have expressed.

As one example, it may be useful to revisit a recent U.S. version of “migrant crisis” from the summer of 2014, when unprecedented thousands of Central American children were detained on the U.S.-Mexico border.

Instead of directing resources toward reducing poverty and violence in Honduras, El Salvador and Guatemala, the U.S. government allocated “tens of millions of dollars” last fiscal year to strengthen Mexico’s southern border, according to an October article in The New York Times.

Barely a year into its implementation, it’s already clear that the Southern Border program is a massive failure, according to human rights groups in the U.S. and Mexico. Increased agents, checkpoints, towers and technology haven’t deterred migrants — rather, people are now forced to take routes that are more dangerous.

Priest and advocate Alejandro Solalinde says increased policing of the border has only made things worse: “The National Migration Institute should guarantee migrant rights, but they’ve become the migrants’ biggest threat,” he told La Jornada. Solalinde cites rampant extortion, abuse and collusion with organized crime by Mexican officials, who he alleges are tasked with carrying out a security plan drawn up in the United States.

Though no longer in the national spotlight, children have not stopped attempting the journey north. Despite a 73 percent increase in migrant detentions in Mexico, The U.S. Customs and Border Protection office reported apprehending 111 percent more unaccompanied minors in September 2015 than in September 2014.

Migrant crises are symptoms of deeper crises and cannot be solved by building bigger walls or deploying a bigger security force. Because so much of human migration is triggered by adverse economic conditions or by displacement by extractive industries, migrant crises will only get worse until the root causes are dealt with. That’s why the Kairos Center’s call to figure out how to “unite the poor to end poverty” is so important today.

The cover image is a nod to CUSLAR’s past, when the organization participated with many others in New York State and around the country in what became known in the 1980s as the sanctuary movement.

The image was originally on a poster for a Sanctuary Celebration held in September 1986 in Washington, D.C.

In 1985, CUSLAR and other community and religious groups supported a young woman from El Salvador with the pseudonym “Esperanza” who had fled brutal U.S.-supported state violence in her country. Her brother had been murdered by the Salvadoran death squads, so her family made the difficult decision to help her leave home.

Esperanza gave birth to a daughter, Mayra, while in hiding in Ithaca. The two were present at an Ithaca Common Council meeting on July 10, 1985 when legislators affirmed Ithaca as a “sanctuary city.” The designation gave official municipal support to those aiding and protecting “illegal aliens,” as they were known then, who had fled Central American nations immersed in struggles against U.S.-backed repressive forces.

CUSLAR’s library collection includes a 46-minute video documentary called “Until it Is Safe to Return,” chronicling the Ithaca sanctuary movement. In it, a back-lit and emotional Esperanza shares her story.

Today, the multicolored wings may also come to symbolize the unity in diversity necessary to solve society’s biggest problems, some of which are discussed in this issue. May we each add our feathers to make possible the flight to collective freedom.