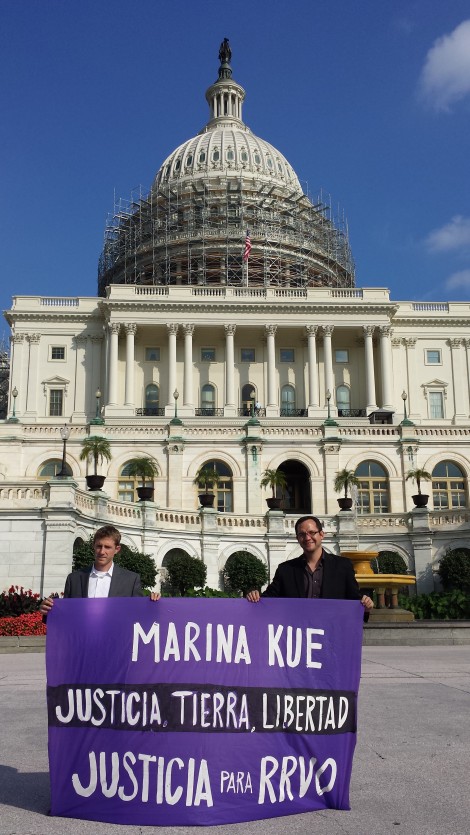 ITHACA, NY — United States Senators and Representatives have joined social movements and human rights organizations in calling for a just resolution to the 2012 Marina Kue massacre in Curuguaty, Paraguay where 11 farmers and six police officers were killed.

Articulación Curuguaty, a coalition of over 40 grassroots and political organizations in Paraguay, has been joined internationally by La Vía Campesina, Oxfam America, the Committee on U.S.-Latin American Relations (CUSLAR) and others, demanding that the Paraguayan government conduct a full and independent investigation into the deaths and carry out agrarian reform in the country.

On November 12, the two-year effort received a boost when Senator Patrick Leahy (D-VT) gave an extended statement to his colleagues on the Senate floor. Leahy expressed his concern for landless farmers in Paraguay, noting that 80 percent of arable land is owned by just 1.6 percent of landowners, a fact exacerbated by pressures from international agribusiness to increase export production.

The veteran Vermont senator noted that as chairman of the Appropriations Subcommittee that funds US foreign assistance programs, he has overseen funding aimed at strengthening Paraguay’s democratic institutions.

He continued: “There will be other ways the United States can help Paraguay build the capacity and accountability of its public sector, expand its economy, and sustainably manage its natural resources. Few things would do more to advance these goals, and improve social stability, than addressing what happened at Marina Kue and providing access to land for Paraguay’s small farmers.”

Leahy was joined by 11 U.S. Representatives led by Sam Farr (D-CA), who co-signed a letter to Paraguayan President Horacio Cartes expressing their desire for a just resolution in the case.

Farr wrote: “I am encouraged to hear that the Paraguayan government is working to reach an agreement with those affected in Marina Kue. I hope this momentum will bring justice to the families and communities impacted, and accelerate implementation of the reforms necessary to create more equitable access to land and opportunity.”

José Tomás Sánchez, a CUSLAR member who spent time with an Oxfam delegation to Capitol Hill in October, was delighted with the news. “Grassroots groups, human rights organizations and political leaders in Paraguay and internationally have been working for more than two years to answer the question, ‘What happened in Marina Kue?’” he said. “We hope the international attention will encourage the Paraguayan government to take expedient and just action.”

Sánchez was a Paraguayan minister who resigned in 2012 after the massacre of Marina Kue and subsequent parliamentary coup against then President Fernando Lugo.

CUSLAR Coordinator Tim Shenk seconded Sánchez’s enthusiasm: “The fact that this case has reached the ears of the U.S. congresspeople, who recognizes Marina Kue as an egregious human rights violation and is encouraging Paraguay to carry out agrarian reform, is a testament to all of the work being done on the ground by countless organizations. CUSLAR is proud to be a part of this effort spearheaded by Articulación Curuguaty. The right to land is a central and legitimate demand for Paraguay’s – and the world’s – impoverished and dispossessed.”

For more information on the case, visit:
https://cuslar.org/land-rights-and-dispossession/paraguay-que-paso-en-curuguaty/

For the full transcript of Senator Leahy’s November 12 speech, visit:

For a copy of the November 13 letter from 11 U.S. Representatives to the president of Paraguay, visit:

CUSLAR is a Cornell University-based organization, founded in 1965, which seeks to promote justice and mutual understanding among the people of the United States, Latin America and the Caribbean. CUSLAR is a project partner of the Center for Transformative Action.