In early October, more than 1,000 Nicaraguan campesinos protested the newest development scheme in Nicaragua–an interoceanic canal. Banners reading “our land is not for sale!” and “Chinese, go home!” filled the Nicaraguan countryside. March organizer Francisca Ramirez stated that she “would rather die than hand over [her] property.” Why is this project causing such controversy?

Nicaragua’s government has recently granted a 100-year concession to a newly formed Chinese-run company to finance and build an inter-oceanic canal at an estimated cost of $40 to $50 billion, depending on the source. Despite grand promises of economic growth and job creation to alleviate the widespread unemployment, this project should not be confused for a development effort. The detrimental environmental and social impacts of the plan are vast. 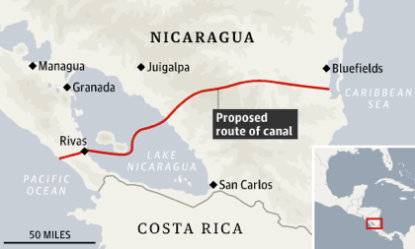 Proponents of the plan promise that it is “critical for lifting the nation out of dire poverty.” Francisco Telemaco Talavera, the outgoing leader of Nicaragua’s National Agrarian University, is one of the strongest supporters of the canal, emphasizing that it will create 50,000 jobs during the five-year construction period and 200,000 more once the canal is finished. Perhaps looking to the prosperity the Panama Canal has brought to Panama, he adds that the canal will turn Nicaragua into “the region’s powerhouse, with economic growth rates as high as 14% per year.” The nation’s president, Daniel Ortega, sees the canal as a way to free his country from the “global economic imperialism” which is responsible for Nicaragua’s problems.

While alleviating the country’s difficulties with one grand plan sounds tempting, the canal is no panacea for Nicaragua and may in fact exacerbate existing problems. In addition to the absence of a bidding process, the project was granted to the HKND without any current environmental impact assessment (EIA) studies. Furthermore, rather than conducting these studies itself, the government will rely on the HKND to do so. As Jorge A. Huete-Perez, director of the Centro de Biologia Molecular at the Universidad Centroamericana, points out, “it is unusual that any government that has the best interests of the nation and its citizens as its top priorities would not unilaterally undertake the necessary groundwork for such a massive project.”

Because the route would pass through such a vast area of land, one of the main concerns is the displacement of indigenous peoples who have been living in those lands since before the Spanish conquest. Danish NGO Forests of the World warns that “the canal is to be built through the Rama and Kriol territory, fragmenting it into two parts.” No formal discussions have taken place with indigenous peoples, and there are concerns about “inclusion, participation, and receiving their faire share if the canal were to traverse their territory.” Though indigenous groups have appealed to the Inter-American Commission Human rights, “citing violations of Nicaraguan law and international labour standards,” it is unclear whether their complaints will result in concessions by the Nicaraguan government.

The constitution was amended last December to make accommodations for the project, and it now grants HKND “the right to expropriate land and natural resources as it sees fit for the success of the project and sub-projects.” Those displaced by the canal would be paid for their property according to June 2013 assessments of the land’s value; while they can contest the amount offered as compensation, they cannot complain about the land being expropriated from them. These provisions should be denounced for what they are: a blank check to the new HKND group to further its interests by interpreting the new amendments to the constitution how it wishes.

If brought before the the Inter-American Court, the case would follow the precedent of Case of the Kichwa Indigenous People of Sarayaku v. Ecuador (2012), in which the international justice system ruled in favor of the Sarayaku who saw their “territory, life, and culture threatened because the State imposed an oil project on their habitat without having previously informed or consulted.” This ruling set a mandatory precedent for the countries in the Organization of American State, of which Nicaragua is a member.

There are also major environmental concerns about the project. Experts estimate that the canal and the secondary projects that would accompany it would “transform wetlands into dry zones, remove hardwood forests, and destroy the habitats of animals including those of the coastal, air, land, and freshwater zones.” The lake is a major source of drinking water and part of a delicate ecosystem that could be destroyed with the canal and the risk of oil-spill contamination. In addition, the canal would cut through two UNESCO biosphere reserves that house endangered species like the jaguar, tapir, sea turtles, and great green macaw.

It is important to understand that there is a fundamental lack of transparency surrounding the project, despite repeated claims by the HKND that it wishes to comply with Nicaraguan law and fairly and transparently implement the project. HKND, besides having no experience building canals or anything else, was spontaneously created and “registered on Grand Cayman Island a few minutes before the [canal] legislation was drafted” by the Nicaraguan government.

This isn’t the first megadevelopment project to encounter well-founded popular resistance in the region. In a forthcoming article in Rethinking Latin American Social Movements (Rowman & Littlefield, 2014), Alicia Swords talks about the Plan Puebla-Panama (PPP) that was revealed in 2000 to “integrate the region from southern Mexico to Panama into the global market.” The PPP included plans for highways, railroads, airports, dams, and an electrical grid. After strong criticism and numerous problems, the plan was reborn in 2008 as the Proyecto Mesoamerica (PM), “with a new name and public image,” but without addressing core concerns. Both the Nicaragua canal and the PPP/PM idea are examples of the “lack of public consultation,” the troubled “vision of development,” the “threat to local livelihoods and Indigenous rights,” “and the “challenges to social and ecological justice and human rights” that many development plans pose (Swords).

Construction for the canal is supposed to begin in December, and it is not yet too late to change the course of the project. As Huete-Perez explains, “it is essential that the Nicaraguan government work with the Inter-American Commission on Human Rights and the United Nations Educational, Scientific, and Cultural Organization (UNESCO) to conduct an exhaustive, transparent, and independent scientific study on the environmental and social long-term impacts of the canal.” The legality and constitutionality of the concession granted to the HKND by the Nicaraguan government must also be reviewed. Shipping firms should be pressured to exert their influence and make sure the plan is not implemented at the expense of people’s rights and the environment. Until then, no further activity related to the canal should continue.

Still, it is clear that Nicaragua, as the poorest country in Central America and the second poorest in the Western hemisphere, is need of economic development. But what should development efforts look like? Huete-Perez argues that efforts should consider Nicaragua’s rich biodiversity and cultural patrimony as well as the benefits provided by the access to clean fresh water, healthy fish populations, and ecotourism. In addition to Huete-Perez’s suggestions, any genuine development plan should begin locally and include indigenous populations in the planning and implementation.